“Let me tell you what I think of bicycling. I think it has done more to emancipate women than anything else in the world. It gives women a feeling of freedom and self-reliance. I stand and rejoice every time I see a woman ride by on a wheel…the picture of free, untrammeled womanhood.”–Susan B. Anthony

Lately I’ve been frustrated with the theory that it’s much less safe to travel alone as a woman. Personally, I enjoy traveling alone. It enables me to experience a place in a way that I wouldn’t be able to

otherwise. Sure it gets a little lonely sometimes (like when there was a very thick language barrier between my bunk-mates and I on one 16-hour train from Shanghai to Chengdu), but overall it’s a great experience and there’s usually always someone friendly or fascinating to meet.

Still, the alone-and-a-woman factor is a main reason for my hesitation to embark on a cross-country bike excursion on my own–I haven’t yet found someone who has the time or desire to join me, and I’m always told about (and have encountered a few of) the creeps of this world. I spent a good chunk of my senior year of college dreaming of and practically proselytizing this long-distance ride, but the gear, training, and fear of bicycling long distances alone as a 23-year-old woman (girl) have built up to me sitting inside on a Monday afternoon thinking about what I have not done. Yet.

Then I realize I would by no means be the first woman to take on a long-distance bicycle ride. The Women on Wheels Wall introduced me to at least four women pedaling around the world on their own, and the site give me tips, tricks, and confidence for embarking on a small-scale version of their adventures. Louise Sutherland was the first person to ride a bike across Brazil(1978), and Anne-Sophie Rodette is currently riding a unicycle through Patagonia.

(See also: National Geographic’s book about the bicycle as a cultural agent of change for women, titled Wheels of Change: How Women Rode the Bicycle to Freedom (With a Few Flat Tires Along the Way).

But I had to go back to 1895 to learn about the first woman to bike around the world. 25-year-old Annie Londonderry did so on a wager, and she caused a lot of raucous by wearing men’s clothing on much of the fifteen month ride. Women on bikes in the late 1890s and the dress reform that accompanied it “challenged traditional gender norms and provided a space where women actively contested and rethought femininity.”1 Furthermore, a woman with a bicycle at that time meant that she no longer had to depend on a man for transportation. In A Social History of the Bicycle, Robert Smith describes the bicycle in the 1890s as a “freedom machine” for women.

Maybe it still is.

Let’s now move to Saudi Arabia. There, women are slowly gaining more rights in the ultra-conservative Islamist state , at lease in some arenas. In 2011, Saudi Arabia’s King Abdullah said that women will have the right to vote and run in municipal elections beginning in 2015, according to the New York Times. He also recently appointed 30 women to the previously all-male Shura Council. Before this past April, women were not allowed to ride bicycles or drive cars in public. Now they can ride motorbikes and bicycles, but (1) only in restricted areas (2) wearing full Islamic head-to-toe abaya (3) accompanied by a male relative, according to TIME World. Women in Saudi Arabia still cannot ride bicycles for transportation, only for recreation.

Speaking of Saudi women’s empowerment, last year Haifaa Al Mansour directed the first feature-length film made by either man or woman shot entirely in Saudi Arabia. (hmm.. sounds like Louise Sutherland being the first person, man or woman, to cross Brazil by bicycle). Perhaps ironically, the film, Wadjda, is about a young girl and her bicycle (see trailer below). NPR reports that Al Mansour “had to stay inside a specially customized van equipped with monitors and communication devices to work on scenes shot in the streets of the capital Riyadh. Otherwise, she could have faced problems with authorities for being a woman on the street without a male guardian.”

The story may be about a girl and her bicycle, but it is also “about hope, embracing change and moving ahead,” Al Mansour told Gloria Steinem and the audience at the film’s Tribeca Film Festival premier. Anyone in Saudi Arabia, however, will have to wait to see the film on DVD since there are no movie theaters in the country.

These stories I’ve just shared give me faith and confidence in my own ability to ride a bicycle solo for a few hundred (or thousand?) miles, keeping in mind that it is both a simple ride and  a representation of something much larger. Whether it be challenging clothing norms in the US in 1895, expanding women’s rights in Saudi Arabia in 2012, or increasing a woman’s confidence to travel fearlessly in 2013 and beyond, bicycles have the potential to empower women. In all matters relating to bicycles, it’s very clear to me that I’m standing on the shoulders of a growing number of female giants. 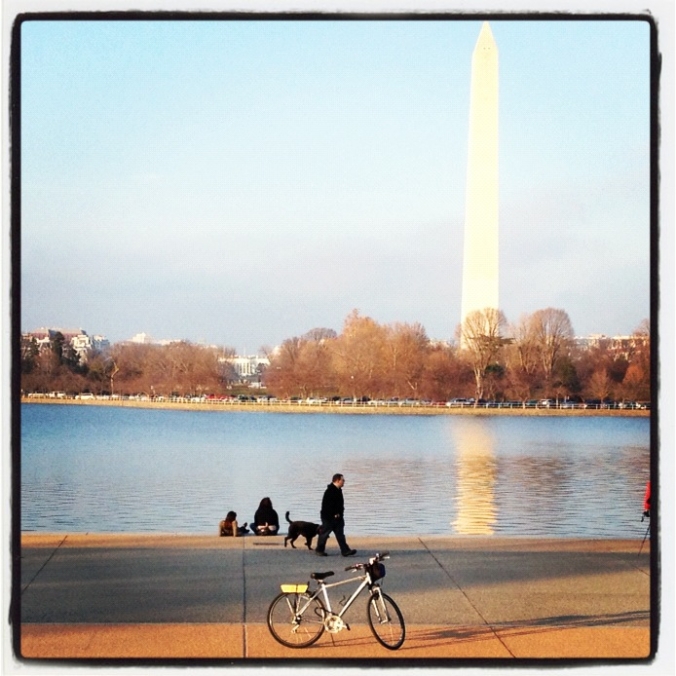 A tourist locked his bike to itself while he went to check out the Thomas Jefferson memorial, and I couldn’t resist snapping this shot.